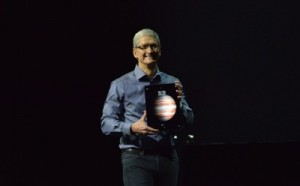 With just a little over a month until Apple’s rumored March event, speculation has been going around speculating what Apple could possibly unveil at its spring event. Last year, Apple unveiled the 12-inch Retina MacBook and announced a shipping date for the Apple Watch. This year? It looks like Apple will be launching iPad Air 3, iPhone 5se, and some new Apple Watch combinations, according to Mark Gurman from 9to5Mac.

First and foremost, Apple will hold the event during the week of March 14, however the date isn’t set in stone yet. And during the event, Apple will update its long overdue 9.7-inch iPad, which was last updated in October 2014. In 2015, Apple chose to unveil the 12.9-inch iPad Pro, rather than update the iPad Air line, however, the iPad maker did update the smaller 7.9-inch iPad mini during that event. Earlier this week, it was reported that Apple was working to add a back facing LED flash to the iPad Air 3, alongside a 4-speaker audio system similar to the current iPad Pro. Gurman also notes that Apple is currently testing various displays with Apple Pencil support for the iPad Air 3.

In terms of iPhone, Apple is going to unveil the long-awaited 4-inch iPhone 5se. The smaller iPhone is said to have the latest A9 processor with M9 coprocessor, which would allow the phone to have an always on ‘Hey Siri.’ In addition, we should see the same 16/64GB storage configurations, updated cameras with the ability to shoot Live Photos, and an NFC chip to be used for Apple Pay. Design wise, the 5se will closely resemble the 2013 iPhone 5s design, but it will ditch the chamfered edges in favor of a softer, rounder edge similar to the iPhone 6.

Lastly, Apple will not unveil new Apple Watch hardware but will refresh the line similar to the update in September 2015 with new Sport band options, additional colors for the Apple Watch Hermès, a Space Black Milanese Loop, and a new band made out of an entirely new material.