How Smartphones Affect Kids at School 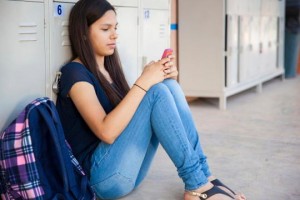 Leaving the phone at home may be the secret to higher grades. (Photo: ©Antonio Diaz/iStock)

Can you boost your child’s test scores by taking away her phone during school hours? That’s the suggestion of a new study, which found that kids who attend schools that had recently enacted smartphone bans did better on tests—especially if they were struggling academically in the first place.

School-wide bans on smartphones attract lots of controversy. Some districts that have enacted them take heat from parents, who want their children to always have a phone on them in case of an emergency. Other schools allow kids to carry them, but teachers say they can be distractions.

But there’s no data as to how smartphones in schools make a dent in student grades, so researchers at the London School of Economics decided to take a look at the issue. They gathered test scores from thousands of 16-year-olds across four cities in England from 2000 to 2012, tracking which schools started smartphone bans and what the effect was.

Turns out that after a mobile ban was introduced in a school, teens boosted their test scores by 6 percent. Bigger gains came from kids who were academic underachievers, whose scores surged by 14 percent.

“Our conclusion is that unstructured use of phones in schools has a negative impact, mainly for kids at the bottom half of the class,” Dr. Richard Murphy, assistant professor of Economics at the University of Texas and co-author of the study, tells Yahoo Parenting. “Schools should consider having a policy restricting phone use,” says Murphy.

This isn’t the only study to conclude that smartphone use affects grades. In 2013, a survey of college students linked more smartphone use to a lower GPA and higher anxiety.

The takeaway, says Murphy, is to limit smartphone use during school hours. If your child’s school doesn’t have an official ban, you can still use parent-imposed limits, especially on kids whose lives revolve around their mobile.

“Even when they’re not actively looking at their phones, they’re often distracted with thoughts of wanting to check their social media accounts—there’s pressure from peers to reply to text messages or respond via social media in a timely fashion,” Amy Morin, psychotherapist and author of 13 Things Mentally Strong People Don’t Do, tells Yahoo Parenting.

Limiting smartphone use during school hours eliminates the distraction—and as the study shows, can promote better grades. “If parents need to reach their children during the school day, they should contact the school directly, not text their teens,” says Morin.

Worried that your child won’t be able to reach you in case of any emergency? “Having kids turn their phone off and storing it in their locker serves as a good compromise,” she says.